Long past time for an update on the kitten. My life has been really busy this year if you haven’t noticed. 😛

The kitten has been named Strider after the Lord of the Rings character. He’s this mysterious kitty, with mysterious origins, who was found in our garage and there’s a wooded area near that part of the house.

When we took him to the vet on July 9th he weighed 3.5 pounds. They said it was over twice the weight he was last time. Apparently he was actually about 1.2 pounds when we first found him and brought him in! O_O!!

Strider has since proved himself to be scary smart. We put two barrier gates in the hallway, one on top of the other. It only took him a couple of attempts before figuring out how to get over them. We moved a foam mattress into a hallway and put it on its side. Strider figured out he can climb on top of it, walk around up there, and peer into other rooms from on top of it.

He also loves this puzzle cat toy box we have. It has holes in the top and sides for putting toy balls in it. 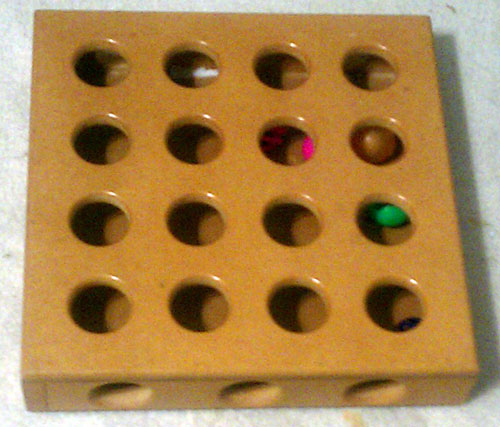 He bats them around to fish them out. I put the balls back in, and Strider is after them again. 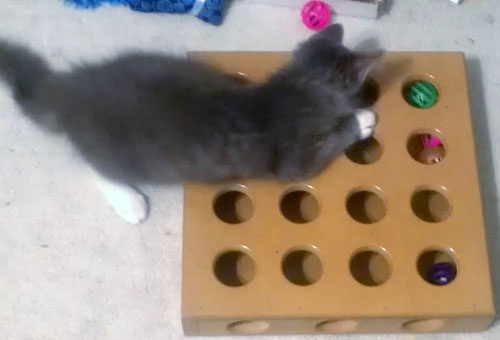 Just today I saw Strider playing with a catnip toy. It’s the first time that a catnip has interested him. So hopefully he’s starting to react to catnip now.

The other cats are still getting used to him. Our oldest cat Kit continues to avoid him completely. Crystal (our 2nd oldest) tolerates him, which is interesting since she too was a feral kitten. Emily, now our middle child, does not like Strider. Emily makes a point of trying to smack Strider from time to time, which is an improvement over hissing and trying to strike. *Sighs.* The youngest, the brothers Kero & Boo, like to watch Strider with keen interest. Once again it’s interesting since they are the only other boys we have. Boo has taking a bit of a liking to Strider. You may recall Boo was the one meowing down the stairs, making Strider cry out in return while he was in the garage. They’ve had an interesting relationship so far. There was a time Strider would instantly come running to Boo the moment he heard Boo meow, or Strider would meow in return. Kero did not like Strider and hissed a lot. He’s become a little bit more tolerant of Strider now, to a point of course.

Strider still gets frightened of things. He’s been getting better. He used to jump or run away when you tossed a toy near him. He was also afraid of the food bag. Strider still runs away and gets startled easily at times. I’m hoping he’ll get up his courage soon.

The other problem is that he still have fleas. The vet gave us some flea treatment, but Strider still scratches. The other cats have started to scratch too. I’m also covered in flea bites on my lower arms and legs. (My husband is unscathed. Lucky.) Strider is due for a re-treatment and we bought flea medication for the other cats. So hopefully this will be finally dealt with soon.

Other than that, Strider likes to meow a lot. I guess that’s what we get for having 3 cats that are part Siamese. Strider probably thinks this much meowing is normal. Heh.